LIFE IS THE EU’S FINANCIAL INSTRUMENT SUPPORTING ENVIRONMENTAL AND CLIMATE ACTION PROJECTS THROUGHOUT THE EU.

The general objective of LIFE is to contribute to the implementation, updating and development of EU environmental and climate policy and legislation by co-financing projects with European added value.

LIFE began in 1992 and there have been four phases of the program: LIFE I, LIFE II, LIFE III and LIFE+. During this period, LIFE has co-financed 3954 projects across the EU, contributing approximately €3.1 billion to the protection of the environment.

EU Regulation no. 1293/2013 launched the fifth phase of LIFE for the period 2014-2020. The European Commission (DG Environment and DG Climate Action) manages the LIFE program together with the Executive Agency for Small and Medium-sized Enterprises (EASME).

The LIFE program is divided into two sub-programs: environment and climate action.

The general objectives of the new LIFE programme can be summarized as follows:

The production process for high performance steel components for the automotive industry has a considerable impact on the environment and on human health that could be alleviated with more efficient use of raw materials and energy, and reductions in waste chemicals and greenhouse gas emissions.

High performance steel components, such as gears, are currently produced by machining technology, mainly due to high requirements in terms of mechanical properties and dimensional stability. The Powder Metallurgy (PM) technology is a sustainable manufacturing process recognized as a green technology and the high mechanical and dimensional requirements above mentioned could also be theoretically met by means of an innovative Die Wall Lubrication (DWL) compaction stage, in combination with high-temperature vacuum sintering and thermochemical treatment.

The design of a structural component based not only on the mechanical performances but which also considers all its life cycle, in a perspective of a circular economy, represents a very important issue.

The main environmental issue tackled by the project regards the efficiency in use of raw materials and energy, combined with the removal of chemicals that have an impact on the environment and on human health in the production process of high density steel components. Moreover, more and more steel PM components from standard practice present recyclability problems due to the presence of alloying elements like copper.

A further environmental problem faced in the project is the elimination and/or drastic reduction of solid pre-mixed lubricants normally added to the metal powder in the standard practice. Thanks to this the delubrication or debinding phase that involve a thermal process having environmental impact, can be avoided.

The aim of the LIFE 4GreenSteel project is to demonstrate the feasibility to replace the traditional energy-intensive and material-consuming machining of wrought metals with a new and innovative High Density Powder Metallurgy (HDPM) technology for the manufacturing of widely used high performance steel components, particularly gears and components for the automotive market.

The project actions will contribute to the implementation of the Circular Economy Action Plan, the Roadmap to a Resource Efficient Europe, the Directive on Energy end-use efficiency and energy services, and Decision (406/2009/CE) on Energy Efficiency. Furthermore, LIFE 4GreenSteel is relevant to EU policy on sustainable growth and will also provide European enterprises with tools to enhance their competitiveness.

The project objectives can be divided into technical end environmental as following presented:

The expected results have been evaluated comparing the HDPM technology respect to the machining technology (M_baseline) and the Standard PM (PM_baseline).

During the project will be developed the following activities:

The project started on July 2017 and successfully concluded on August 2021.
Here we can summarize the project development ad the technical results obtained

The first project actions regarded the study and development of a ‘green’ lubricant and lubrication techniques, the design and construction of a prototype press coupled with a die wall lubrication automatic system.

The approach for the development of a “green and efficient” lubricant has been based on the following main considerations: the high pressure that the lubricant have to withstand, the cleanliness needed to avoid metal powder contamination and the easy way to deposition on mould surfaces. In order to obtain an effective layer of lubricant on the mould wall, many techniques have been considered but spraying has proved to be the most effective: an effective stable liquid suspension based on solid lubricant has been studied and produced.

The effectiveness of the different lubricants have been tested in term of extraction stress after warm die compaction, measured by a universal testing machine. Extraction tests have been demonstrated the effectiveness of the DWL compaction system as shown in Figure 01. The extraction stress can be reduced in the range from 55% up to more than 75% adopting the DWL compaction system respect to the standard internal lubrication. 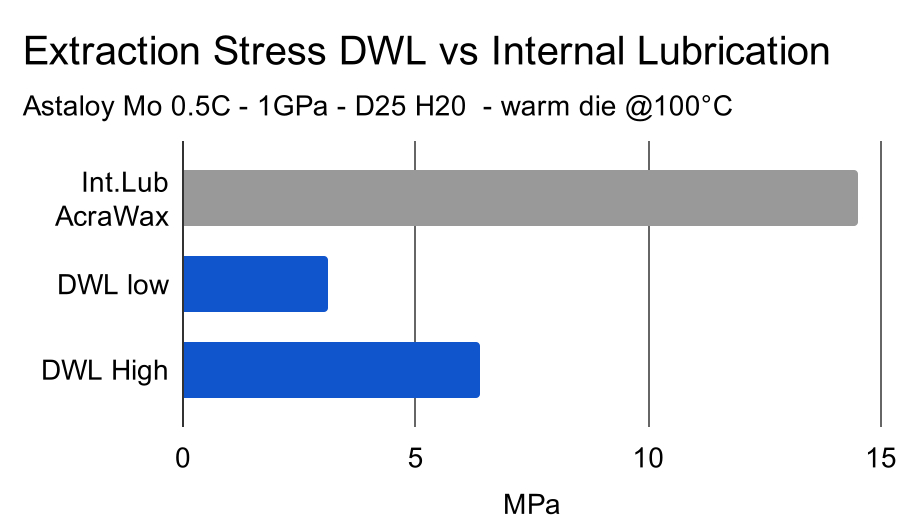 Figure 02 shows the benefits of DWL respect to the standard practice and highlights the effectiveness of DWL in terms of improved green density: the target value of 7.30-7.40 g/cc foreseen in the project have been successfully reached and overcame for many materials normally adopted in the PM standard practice. 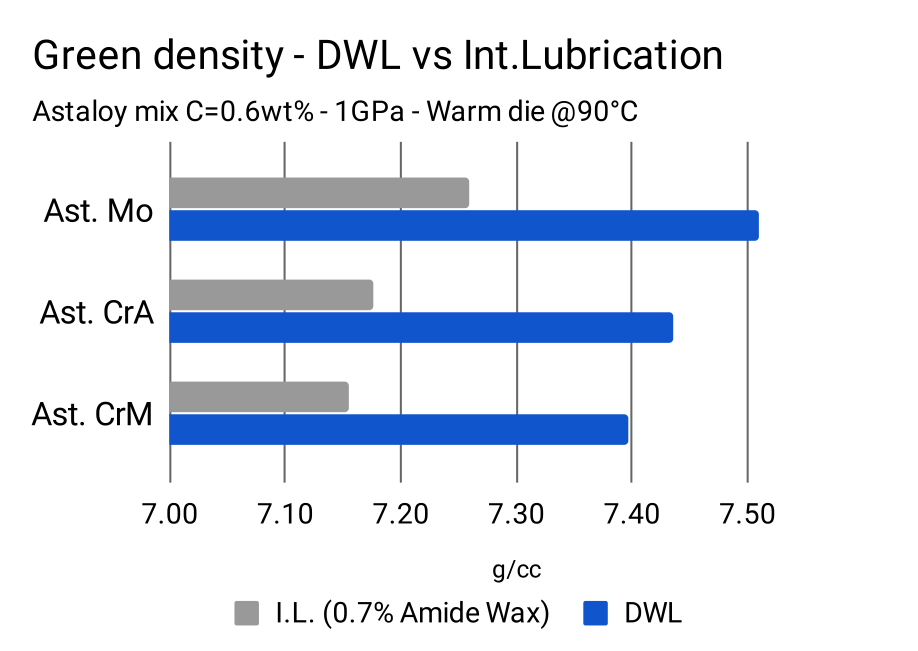 The press prototype integrating the automatic Die Wall Lubrication system has been studied, designed, and developed by the project partner SACMI.  The construction of the press was successfully completed and tested. All the samples and the related data here presented have been obtained using the press prototype shown in figure 03. 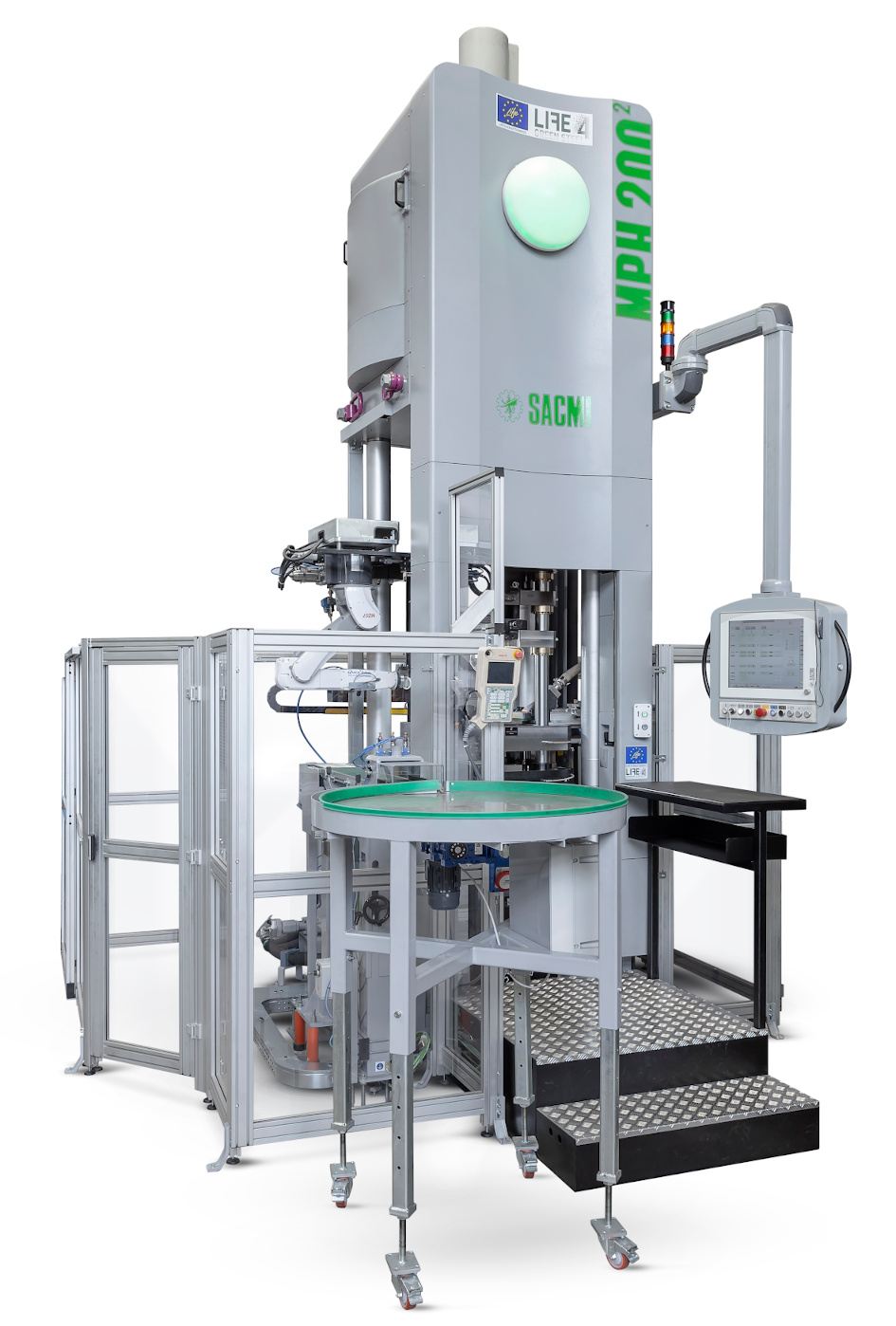 Another project task regarded the alloy design in order to define the chemical composition, copper and nickel free, of low alloy PM steel. Silicon and Manganese are the two element that have been choose and tested: they are environmentally friendly and they increase the hardenability of steels.

Figure 04 and figure 05 show the alloy design, based on Master Alloy (MA), benefits after sintering in term of improved dimensional stability and increased hardenability. Increasing the hardenability increase the hardness due to microstructure evolution to harder phase. 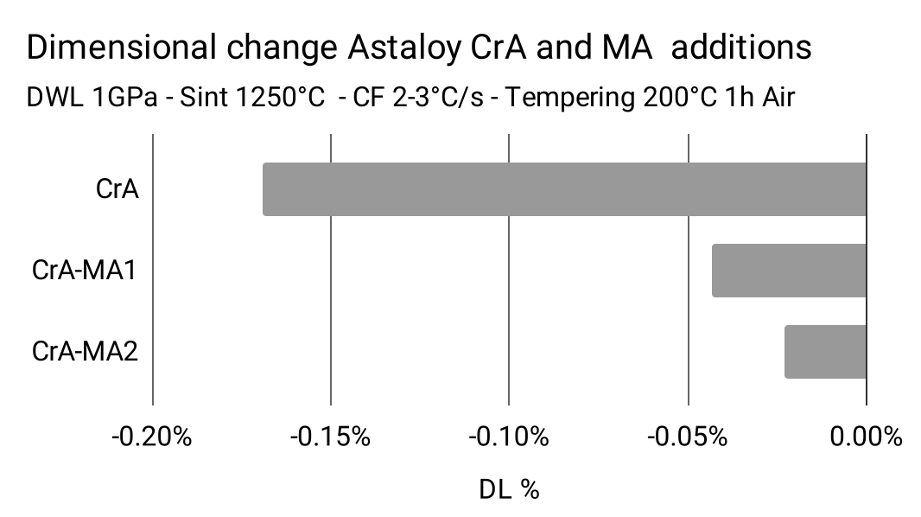 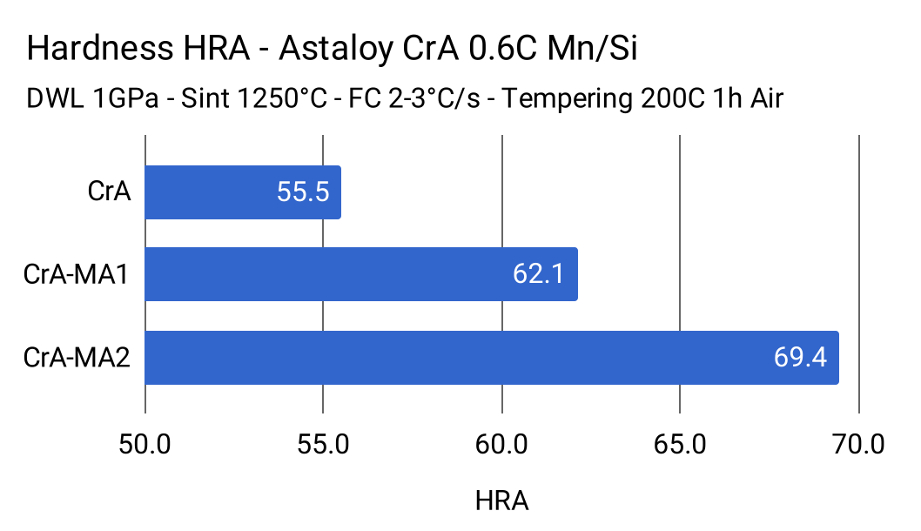 For this investigation Transverse Rupture Strength (TRS) samples have been adopted as shown in figure 06. 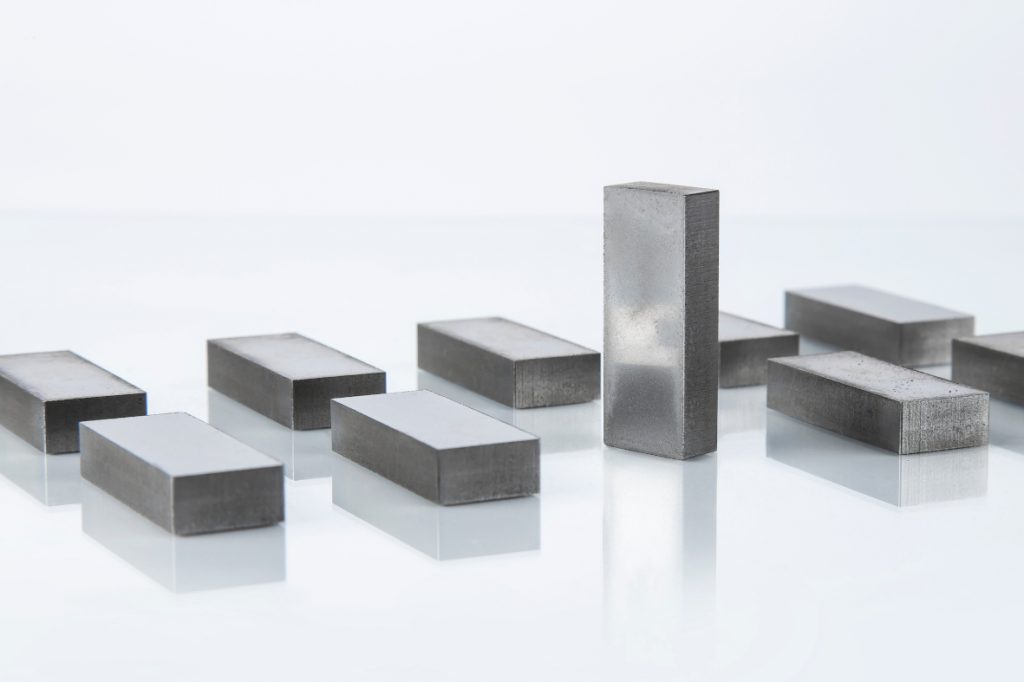 Another important project action regarded the production of complex structural steel samples by DWL and its microstructural and mechanical characterization.

In this phase also DWL gears prototypes have been successfully develop and tested.

TRS samples have been adopted to test mechanical and dimensional properties after compaction (i.e. green strength) and after sintering or heat treatment.

An outstanding results have been obtained in term of green strength: figure 07 shows the green strength of standard PM and DWL component. The orange line (i.e. 30-35 MPa) represents the resistance threshold that a green sample must have in order to sustain mechanical processing. This critical point can not be overcome by standard PM material whereas DWL one can easily do it. The green strength of the DWL components (from 40 up to 65 MPa) is more than double respect to the Standard PM (from 15 up to 25 MPa) and open the interesting possibility to perform some dry machining operation before sintering. 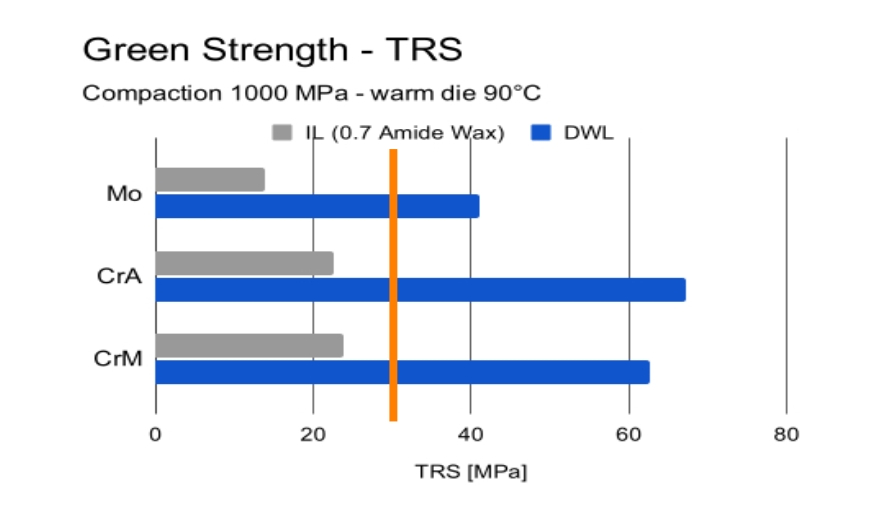 This aspect has been also successfully tested as shown in figure 08: a green DWL cylinder, external diameter 45 mm, machined  and drilled. This results is really important because the dry machining operation on green components require less energy respect to the sintered components and therefore offers more environmental benefits. 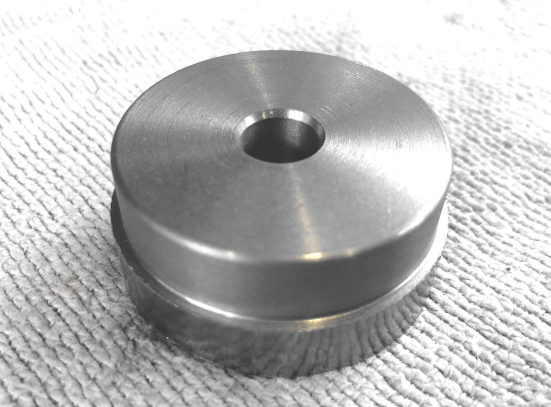 Very high density levels have been obtained and the project target of 7.30 g/cc has been easily overcome end near full density conditions, more than 7.67 g/cc for all class of material investigated have been obtained. Under this conditions also DWL gears (De=45mm) have been successfully produced as shown in figure 09.

Figure 10 shows the sinter density evolution as function of the compaction pressure. 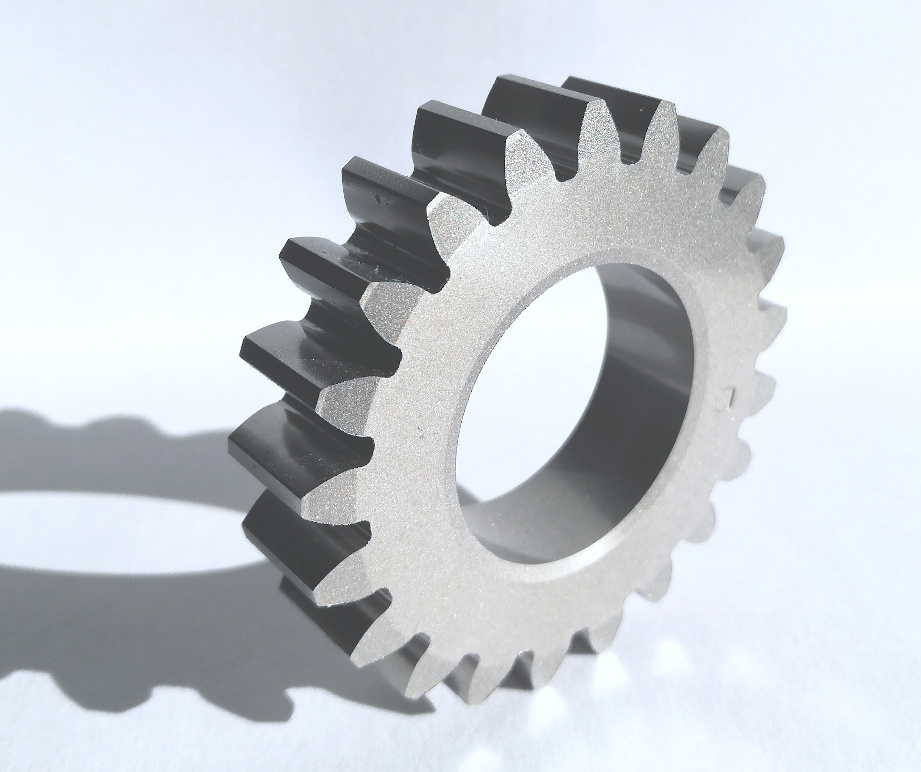 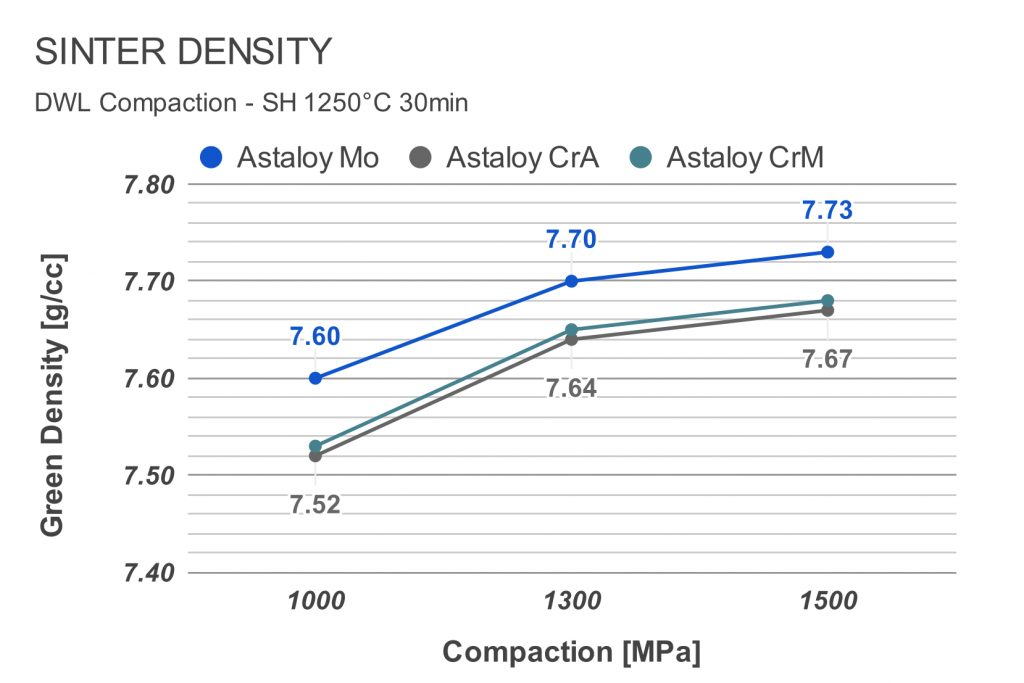 Object of investigation was also the dimensional stability of the DWL components respect to the standard PM one.

Figure 11 summaries the results in term of dimensional analysis about the low alloyed chromium steel; it is possible to note the very high benefits of DWL:

About the target values in term of mechanical properties for DWL components after sintering and heat treatment, the Yield Strength (YS), Ultimate Tensile Strength (UTS) and elongation at fracture (Ef) have been overcome.
The mechanical strength of the material was measured by uni-axial tensile test. Dog-bone tensile bar were produced following the ASTM B925 standard. The tensile tests were carried out using a universal machine model MTS Criterion C45. The tests were conducted in accordance with the ASTM E8M standard by adopting a “gage length” strain gauge equal to 12mm.
For the DWL material Astaloy Mo 0.5%C after heat treatment of quench and tempering the following values have been reached.
In brackets the target project values YS=1309MPa (1000); UTS=1700MPa (1200); Ef=2.7% (2)
Figure 12 summarize these results and emphasize the DWL benefits on mechanical properties respect to the best practice of the standard PM. The elongation at fracture is normally a weakness point for the sintered components where value above 1.5-1.7% can not be reached by standard PM after quench and tempering. For this reason the DWL value of 2.7% can be considered a very good result.
The Yield Strength and the Ultimate Tensile Strength are improved around 20% and the elongation at fracture around the 70%. 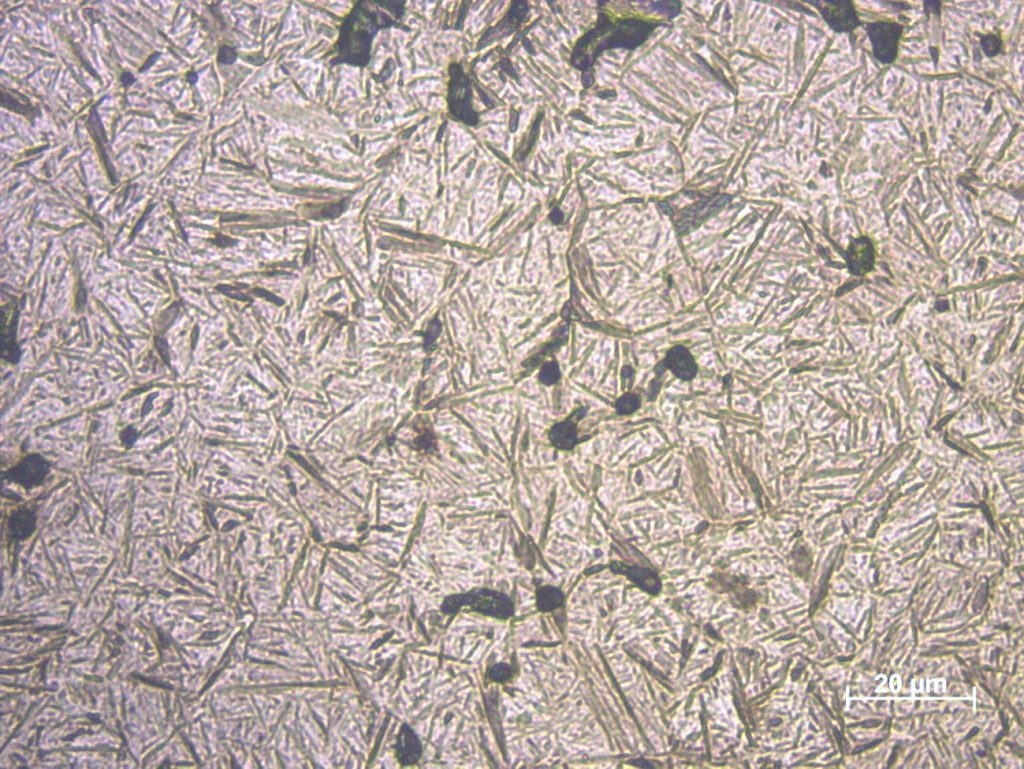 About the gear DWL prototype also fatigue performances have been investigated. The material 20MnCr5 used for power gear applications (i.e. forged  gears from machining) have been adopted like benchmark.

Figure 14 shows the fatigue strength after thermochemical treatment of DWL gears respect to the forged/machined material. Standard PM steels normally show a fatigue limit in the range of 50% of the forged one.

The DWL gear having, high density, a well calibrated case hardened profile, a fine microstructure, allow to obtain performance in the range of 70% respect to the forged materials.

The LPC process has been studied and a numerical model, that allows to define the process parameters to conduct the thermochemical process LPC at industrial level, has been developed.

The machined 20MnCr5 is a Gas Carburized gear adopted for a commercial planetary gearboxes that the DWL Gear developed in the project can be the substitute.

Figure 15 shows the comparison of the macro hardness HRC measured after case hardening by means of LPC process. The DWL LPC gear shows a surface hardness of 58.4 HRC that exceed the 55 HRC minimum requested for power gear applications (threshold orange line). This result is very good having in mind that the best macro hardness for the best practice of case hardened standard PM does not exceed 52-53 HRC.

Figure 16 shows a detail of the carbon penetration on cross section of the gear teeth after LPC. The samples have been observed at LOM after chemical etching in order to highlight the microstructure. It is possible to see the well defined carbon profile, also measured from the microhardness investigation, and both confirm: 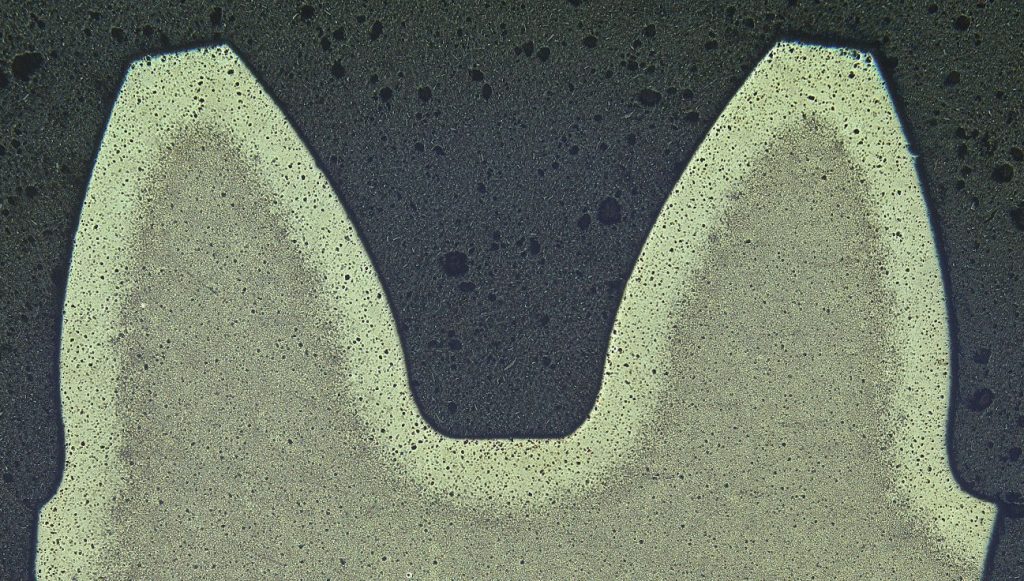 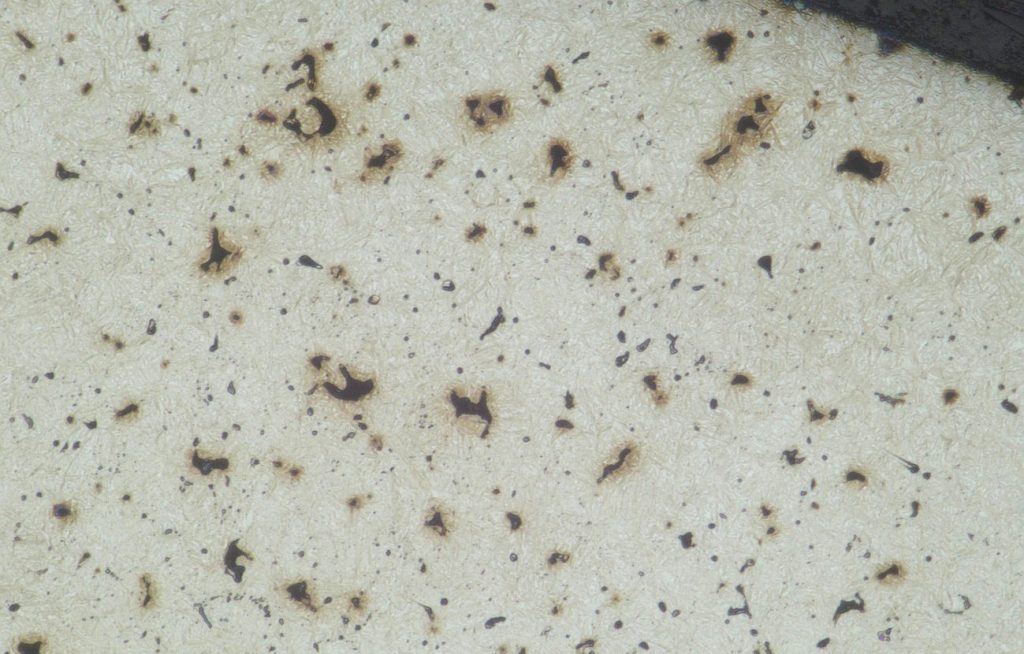 In conclusion we can assert that all the technical objectives of the project have been reached ad in some cases overcome.

The LIFE 4GreenSteel project was born from a group of companies and universities involved in the field of powder metallurgy with the aim of finding innovative solutions to mitigate and reduce the environmental impact of industrial activities.

The companies and university involved are:

The Powder Metallurgy technology is a sustainable manufacturing process recognized as a green technology. The aim of the project is to demonstrate the feasibility to replace the traditional energy-intensive and materialconsuming machining of wrought metals with a new and innovative High Density Powder Metallurgy (HDPM) technology for the manufacturing of high-performance steel components. The project has received the financial support of the European Union through the LIFE programme, thanks to the environmental importance of the project and to the possibility of transferring it to other companies.